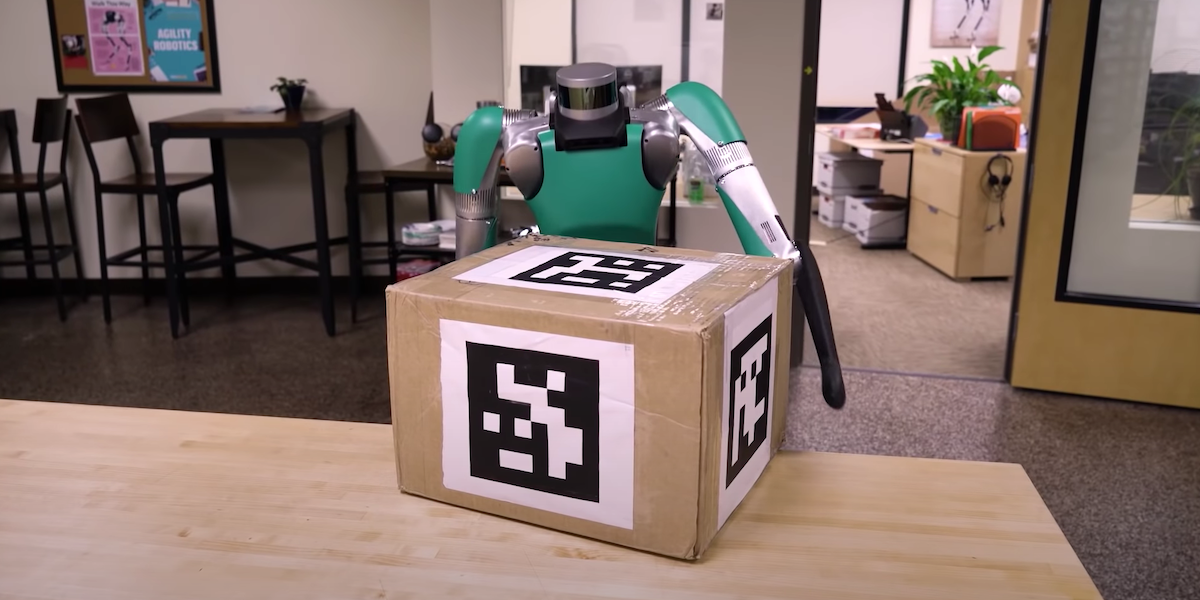 As the pandemic wears on, humanoid robots that can perform general tasks could become increasingly important. They can move heavy objects in warehouses, assist with last-yard deliveries, and potentially be involved in other tasks where low human-to-human contact is preferable for safety reasons.

Agility Robotics is one of the companies making these helper robots. The company, which was spun out of the Dynamic Robotics Laboratory at Oregon State University, first got broad attention last year when it began a pilot with Ford, delivering packages in concert with the car maker’s autonomous vehicles. And it’s capitalizing on fortuitous timing. When the pandemic hit, Agility Robotics had already turned from a lab project into a real company, and it was reaching a level of project maturity with its bipedal Digit robot. Now the company, fresh off of a $20 million funding round, is accelerating its quest to claim a chunk of the robot-powered material-handling and logistics market with additional partnerships and impending new versions of Digit.

Sometimes when people say “robot,” it’s shorthand for automated machines like a robot arm that can sort rubbish or flip burgers. But Agility Robotics’ Digit is more in line with what a child usually imagines a robot to be: humanoid, with a head (sort of), torso, two arms, and two legs. Digit is an evolution of the company’s original robot, Cassie, which had two legs but no arms. As Agility Robotics CEO Damion Shelton quipped in an interview with VentureBeat, “Digit is the product we were always building; we just happen to be able to stop halfway up the body and sell the legs separately — which was Cassie — and then once you complete the upper body, that was Digit.”

Some robots, especially those of the non-humanoid variety, are single-purpose. That is, they do only one thing, ideally with extreme precision and efficiency. By contrast, Digit is a general-purpose robot, which is to say that it’s designed to be able to perform a variety of non-specific tasks reasonably well.

Shelton illustrated the difference. “Let’s imagine you have a business that has a conventional high-speed conveyor belt, and you have a task which is, say, you have to shove a packet off that conveyor belt. If you’re doing that 24 hours a day at superhuman speeds, there’s really no reason not to fully automate it,” he said. That’s a case where a single-purpose robot is ideal.

“The reverse example is: Imagine you’re at my house. I get firewood delivered once a year. I couldn’t possibly use a [firewood-stacking] robot 24/7. And so something that can do firewood loading and unloading in my woodshed once a year, and then infill other tasks as the duty cycle demands, is more useful,” Shelton said.

By default, Digit ships with a sort of general “intelligence,” where it can stand up, it knows how to move through environments without bumping into things, and it can pick up objects. It doesn’t know how to, say, drive a truck. But Shelton says its general capabilities are versatile and can serve a variety of needs.

“There’s not actually a ton of difference between carrying tomatoes in a field in California and carrying a box up to my doorstep,” he said. There are obviously some differences, like the climate, the specifics of knowing how not to step on plants, and so on. “But the differentiation is really at that application layer, much more so than it is at the core ergonomics layer.”

Although Shelton alluded to upcoming partnerships with other companies, for the moment, he’s mum on the details. As is often the case, there are non-disclosure agreements (NDAs) in place as deals become final and all parties agree to the timing of announcements. The Ford pilot was a huge get for the small company, but Shelton wasn’t able to give any on-the-record updates on how that project is going. Ford did not respond to VentureBeat’s request for comment on the matter. But beyond that, “Ford is not the only partner we have,” Shelton said. “We’re working in areas that I think would not be surprising to anybody […] who is looking at material handling, logistics — those kinds of applications.”

More than anything, though, the recent funding marks a pivot for Agility Robotics as it moves beyond R&D and toward actual commercial deployments. “The plan had always been to sell Cassie as an R&D device and Digit as the commercial product,” Shelton said.

Shelton said that the company is already designing the next two versions of Digit (although the second one may have a different moniker when it arrives). They’re on approximately a two-year product cycle, meaning that the second one is about four years out.

The first update is more about maximizing Digit’s existing hardware capabilities than anything else. Shelton likens it to the debuts of the iPhone and App Store — the hardware came out first, and then the second wave of the product brought the App Store and unlocked so much of what the hardware could do. The innovation was in the applications that took advantage of the hardware. That’s where Agility Robotics is in Digit’s development and deployment. “We’re excited to be boring for the next version of [Digit], which lets us focus on the software more than the hardware,” Shelton joked.

The company offers customers an API, and they can use local or web-based interfaces to send commands to Digit, or even write low-level code.

The next version of Digit is yet to be defined, but Agility Robotics knows how it wants to get there, at least. “There’s the ‘unknown unknowns’ and the ‘known unknowns,’ and you can really only design toward the known unknowns,” Shelton said. “So the [second Digit] is really going to be a roll-up of all of what we’ve learned with the partners that we’re deploying with over the next couple years, and is intended to sort of backfill things that can’t be changed just with software improvements.” He didn’t elaborate on what some of those potential hardware upgrades would be, but he did toss out the example of adding fingers to Digit’s grippers if a customer needed it to, for example, sort high volumes of mail.

Ironically, building and shipping a product that can potentially solve pandemic-related challenges during a pandemic is not easy. “One of the big procedural changes that we’ve had to go through, much sooner than we probably otherwise would have, is really thinking through Digit as something that you can unbox and use as a totally independent customer,” Shelton said. Before the pandemic, if a customer needed some assistance getting a Digit up and running, an engineer could just hop on a plane and be on site in a few hours; that’s just not an option these days. That forced Agility Robotics to push for product maturity, enabling out-of-the-box deployment, with more urgency.

While Agility Robotics appears locked into two iterations of its core robot over the next four years, a chief competitor in the logistics market, Boston Dynamics, is diversifying. It’s working on Pick and Handle, which are designed to perform tasks like moving boxes in a warehouse; Spot, a modular quadruped robot (read: robot dog); and the humanoid biped Atlas robot. Atlas competes directly with Digit, but Boston Dynamics isn’t planning to commercialize it yet.

Boston Dynamics has had multiple parent companies over the years — Google, then Softbank, and now potentially Hyundai. Like Ford, Hyundai is working on autonomous vehicles. If Hyundai secures the deal, both automakers will own or will be partnering with general-purpose logistical helper robots, too.

Apple Workplace Rules Violate US Labour Law, Agency Finds
New SH1MMER Exploit for Chromebook Unenrolls Managed ChromeOS Devices
US Panel to Vote on TikTok Ban Over National Security Concerns in February
WhatsApp Directed to Publicise Its Undertaking Regarding Data Protection Given to the Centre in 2021
Eliminating SaaS Shadow IT is Now Available via a Self-Service Product, Free of Charge