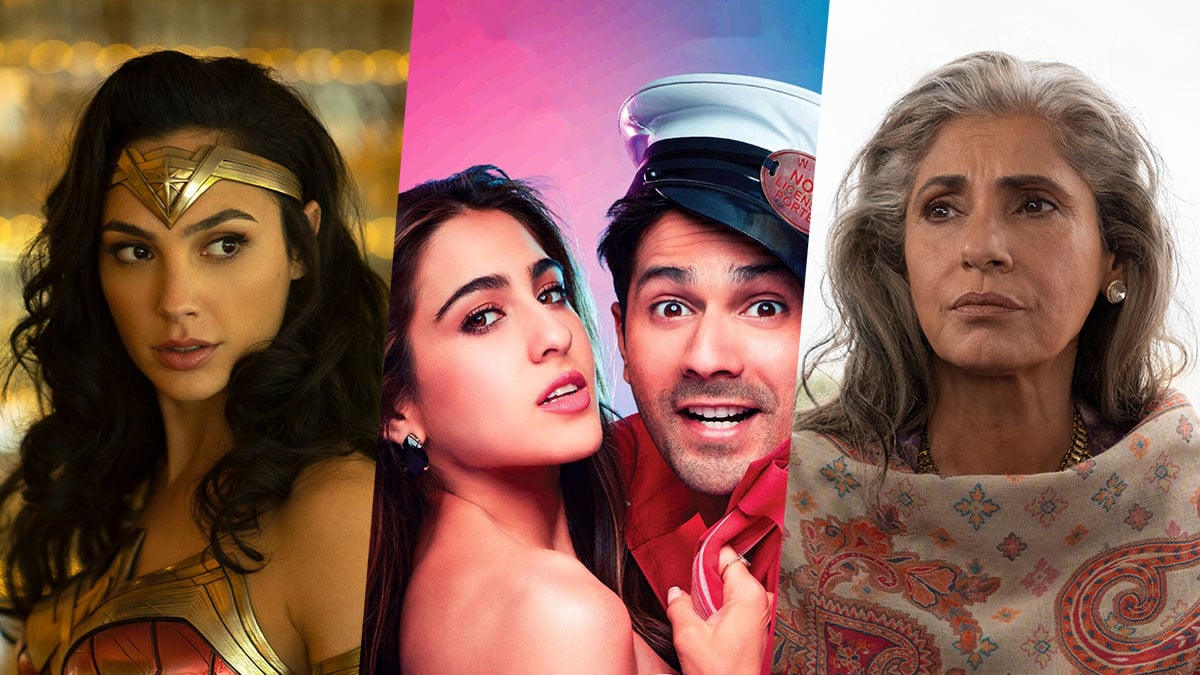 December may be the final month of the year, but it’s going to have a lot of firsts too. Netflix’s first animated movie from India; Apple TV+’s first animated feature film; George Clooney’s first movie in four years; David Fincher’s first movie in six years; Shonda Rhimes’ first series at Netflix; and lastly, Wonder Woman 1984 day-and-date on HBO Max and in cinemas — a first for a superhero movie of this size. WW84 will be in theatres in India too, as will Christopher Nolan’s Tenet, but that is not a good option, unless you’re assured that you’ll be alone (or have enough money to book out the hall for yourself). Thankfully, Tenet is coming home too in December, though you’ll have to pay for the Blu-ray or pick it up digitally on an international platform.

Say hello to India’s Marvelous Mrs. Maisel. Two Indian-Americans, Ravi Patel (Meet the Patels) and Neel Shah (The Bold Type), are behind this comedy series, in which a privileged woman (Swara Bhasker) fearful of settling down runs away from her marriage and decides to pursue stand-up in her new life. She promptly fails but then begins to put in the work, with help from a fellow comic (Patel, who’s also acting in the series), and stands up to her alarmed parents. All episodes on release date.

The first animated effort to come from Netflix India — it premièred at Venice Film Festival last year — has been made using pain-staking traditional animation techniques. Director Gitanjali Rao’s debut feature Bombay Rose is an ode to both Bollywood the city of Bombay, through the lens of a former club dancer looking after a kid, a Kashmiri orphan scrapping a living on the streets, and an elderly woman lost in the memories of a lost love.

Anurag Kashyap is among the producers.

David Fincher returns with his first feature film in six years — Gone Girl was the last one — that is about the writer Herman J. Mankiewicz who wrote Citizen Kane, considered by some to be the greatest movie of all time. Mank chronicles that chapter of his life, and his conflicts with Orson Welles during filming and leading up to release. And oh, it’s all in black and white.

When: December 4
Where: Disney+ Hotstar

Three months after it was made available for a premium fee (around $30) in addition to the subscription value of Disney+, the live-action reimagining of the 1998 animated original can be streamed by everyone on Disney+. That also means it will be available on Disney+ Hotstar, in English, Hindi, Tamil, and Telugu. Mulan has been embroiled in multiple controversies, and the film failed to make an impact at the Chinese box office, as Disney had hoped.

The story is the same as the original: the titular young woman takes her ailing father’s place in the Imperial Army, disguising herself as a man. But Mulan adds a new female character Xianniang (Gong Li), who works for the heroine’s enemies and serves as a mirror of sorts to our protagonist.

When: December 7
Where: Voot Select

Breaking Bad star Bryan Cranston leads this American remake of the Israeli TV series Kvodo, created by Ron Ninio and Shlomo Mashiach, in which a respected judge will do anything to protect his son (Hunter Doohan) who is involved in a hit-and-run accident. (Your Honor was also the title of a recent Indian remake on SonyLIV, led by Jimmy Sheirgill.) This one has better pedigree, with The Good Fight creators Robert King and Michelle King involved as executive producers, and Peter Moffat (UK’s Criminal Justice) as writer and showrunner.

When: December 11
Where: Amazon Prime Video

Bhumi Pednekar plays wronged IAS officer Chanchal Chauhan, who is roped in to frame a corrupt and squeaky-clean politician (Arshad Warsi), but events take a supernatural turn after the ghost of goddess Durga seemingly takes over Chanchal’s body — with vengeance on her mind and an agenda of her own. A remake of writer-director G. Ashok’s 2018 Telugu-language film Bhaagamathie.

Akshay Kumar is among the producers.

When: December 11
Where: Netflix

Meryl Streep, James Corden, Nicole Kidman, Keegan-Michael Key, Andrew Rannells, Ariana DeBose, and Kerry Washington lead the ensemble cast of prolific television producer Ryan Murphy’s next movie, that is based on the 2018 Broadway musical of the same name. In it, two Broadway stars (Streep and Corden) attempt to infuse life into their careers by helping a female high school student go to the prom with her girlfriend.

When: December 11
Where: Netflix

In a plot no one could have seen coming, Sanjay Dutt will use cricket to save Afghani children from becoming suicide bombers in this drama directed by Girish Malik (2013’s Jal) that was filmed in Afghanistan and Kyrgyzstan. If the cringey over-the-top trailer is anything to go by, Torbaaz looks destined to sink like so many Netflix Indian films have done so in 2020. Nargis Fakhri, Rahul Dev, Gavie Chahal, Pransh Chopra, and Rahul Mittra are along for the ride.

When: December 11
Where: Apple TV+

Judging by early reviews, Apple seems to have a serious shot at an Oscar nomination for best animated picture with this thematic trilogy-concluding chapter — after The Secret of Kells and Song of the Sea, part of the so-called Irish folklore trilogy — from Irish filmmaker Tomm Moore. In Wolfwalkers, a young female hunter befriends a wildling girl whose tribe is rumoured to transform into wolves after dark.

When: December 15
Where: Blu-ray, digital outside India

Christopher Nolan’s latest film arrives in Indian cinemas on December 4, but if you’re not comfortable stepping into an indoor AC environment with strangers — understandably — or Tenet is not playing in theatres near you, then your next best option is this. Tenet will be available on Blu-ray and digital platforms (the likes of iTunes and Google Play) outside India, and though it’s a pricier way to watch the film, you can’t put a value on not contracting COVID.

In the interest of not spoiling anything, I’m not going to talk about the premise—who am I kidding, the trailers don’t tell us anything. Except that Tenet involves time inversion, and that our protagonist, played by John David Washington, is tasked with saving the world. And oh, Bollywood veteran Dimple Kapadia has a role to play in the proceedings too.

Watch the Final Trailer for Tenet

When: December 16
Where: Amazon Prime Video

The sci-fi series that gets the science right returns for its fifth and penultimate season — The Expanse was recently renewed for a sixth and final season, minus one cast member who’s been fired over sexual misconduct — which finds the Belters vowing vengeance for the centuries of exploitation they have had to endure, at the hands of “the inners”: those who live on Earth and Mars. Meanwhile, a Solar System exodus begins as people look for new homes beyond the Ring.

Three episodes at launch, one episode weekly thereafter until February 3, 2021.

When: December 18
Where: Voot Select

Stephen King has penned a new ending for the second adaptation of his 1978 apocalyptic novel that takes place during an influenza pandemic — coincidental, as the series was conceptualised and completed filming prior to COVID-19 — and centers on one of the only surviving groups, as they go up against the Dark Man (Alexander Skarsgård), with a “lethal smile and unspeakable powers.” James Marsden, Amber Heard, Greg Kinnear, Whoopi Goldberg, and Ezra Miller co-star.

Josh Boone (The New Mutants, The Fault in Our Stars) is a co-creator, and has written and directed multiple episodes of nine-episode The Stand miniseries. One episode weekly until February 11, 2021.

When: December 18
Where: Netflix

Chadwick Boseman’s final posthumous performance comes as a trumpeter in late 1920s Chicago, a time when white managers and producers reigned over black recording artists, even those as famous as the Mother of the Blues Ma Rainey (Viola Davis). Based on August Wilson’s 1982 play of the same name, the film explores issues of race and art over the course of a single afternoon, as tempers rise inside a recording studio.

When: December 23
Where: Netflix

George Clooney directs and stars in this sci-fi film that’s being described as some by Gravity meets The Revenant. Those comparisons are somewhat reinforced by the fact that The Revenant co-writer Mark L. Smith wrote The Midnight Sky. Based on Lily Brooks-Dalton’s “Good Morning, Midnight”, it follows a lonely scientist (Clooney) as he must trek across the Arctic in an attempt to stop astronauts (Felicity Jones among them) from returning to Earth, which is in the grip of a mysterious global catastrophe. No, it’s not COVID-19.

When: December 25
Where: Netflix

What would Gossip Girl look like if it took place in Downton Abbey? Well, Shonda Rhimes is about to tell us with her first Netflix series. Set in London in the 1810s and based on Julia Quinn’s novel series, Bridgerton follows the aristocratic, elite, and wealthy whose lives are punctured by a Lady Whistledown, who promises to “share every last detail” of the scandals she uncovers. This is early 19th century after all, and without the Internet, you’ve to understand that people are lacking in entertainment. Chris Van Dusen (Scandal) is the creator and showrunner.

When: December 25
Where: Amazon Prime Video

Twenty-five years afer the original, director David Dhawan is remaking his own film — which was itself a remake of the Tamil-language film Chinna Mapillai — with his son Varun Dhawan taking over from Govinda, and Sara Ali Khan filling in for her step-aunt Karisma Kapoor in the lead. It’s the classic working-class guy wants to marry a rich woman plot, except it’s treated as a comedy with the porter pretending to be a rich man himself.

When: December 25
Where: Disney+ Hotstar

Pixar’s newest movie takes place in the chronological opposite of Heaven (known here as The Great Beyond). No, not Hell — but the place before life begins. It’s called The Great Before, and it’s where souls get their personalities before they inhabit bodies down on Earth. Hence, “Soul.” The film follows a middle-school music teacher who inadvertently ends up in The Great Before, and then sets out on an impossible journey to return to his body before a big career opportunity passes him by.

Originally meant for theatres, but thanks to COVID-19, Soul is now going straight to Disney+ Hotstar. Jamie Foxx, Tina Fey, Angela Bassett are part of the Soul voice cast, with the duo of Trent Reznor and Atticus Ross composing the score.

When: December 25
Where: HBO Max

The Gal Gadot-led Wonder Woman sequel will be available in Indian cinemas on Christmas too, but if you don’t feel comfortable going to a theatre, but are willing to put up with a VPN and a pricey HBO Max subscription — really, I’m talking about myself here — then the next major DC superhero movie is coming straight to your home.