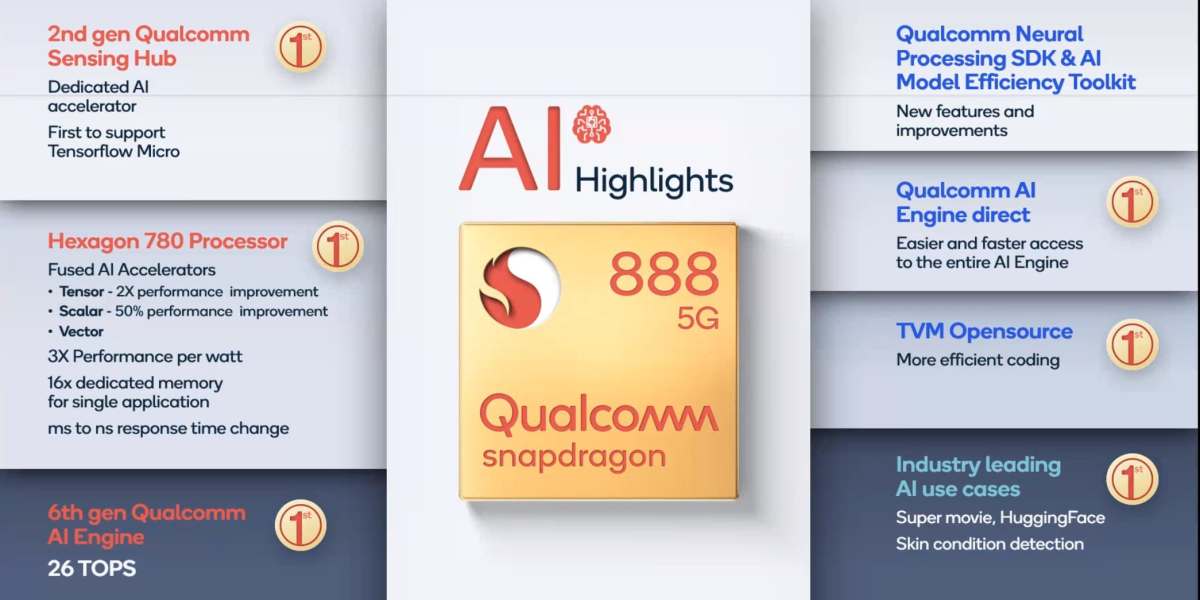 Although Apple’s latest A14 Bionic chip enabled the iPhone 12 family and iPad Air tablets to deliver impressive performance improvements, Qualcomm is making clear that the next generation of Android devices will rely heavily on advanced AI and computer vision processors to retake the performance lead. Teased yesterday at Qualcomm’s virtual Tech Summit, the Snapdragon 888 is getting a full reveal today, and the year-over-year gains are impressive, notably including the largest jump in AI performance in Snapdragon history.

The Snapdragon 888’s debut is significant for technical decision makers because the chip will power most if not all of 2021’s flagship Android phones, which collectively represent a large share of the over two billion computers sold globally each year. Moreover, the 888’s increasing reliance on AI processing demonstrates how machine learning’s role is now critical in advancing all areas of computing, ranging from how devices work when they’re fully on to what they’re quietly doing when not in active use.

From a high-level perspective, the Snapdragon 888 is a sequel to last year’s flagship 865 chips, leveraging 5-nanometer process technology and tighter integration with 5G and AI chips to deliver performance and power efficiency gains. The 888 will be Qualcomm’s first chip with an integrated Snapdragon X60 modem, including third-generation millimeter wave 5G with the promise of 7.5Gbps downloads and 3Gbps uploads, and notably won’t be offered without that modem or 5G functionality. It will also be the first to support Wi-Fi 6E networks and dual-antenna Bluetooth 5.2 for non-cellular wireless connectivity.

One of the largest changes in the Snapdragon 888 is its shift to a unified AI architecture, including a Hexagon 780 processor with fused rather than separated AI accelerators. Promising 26 TOPS of performance — substantially higher than the A14 Bionic’s 11 TOPS and the 15 TOPS in last year’s Snapdragon 865 — the sixth-generation AI system includes 16 times more dedicated memory and twice the tensor accelerator compute capacity. Thanks to the new integrated design, it delivers up to three times the performance per watt and 1,000 times faster hand-off times than before.

All of this power, Qualcomm notes, is needed to empower a series of tripling improvements in photo and video processing. Instead of asking all of a device’s cameras to share one image signal processor, the Spectra 580 computer vision processor now contains three ISPs, so you can snap three 28-megapixel still images at 30 frames per second without lag or record three 4K HDR videos at the same time, in either case with separate AI workloads for each camera. As crazy as that sounds, the premise is that new AI-powered cameras will automatically monitor three lenses and maintain optimal video zoom at all times, use data from one lens to assist with person or object removal from another, and deliver video composited from multiple HDR image sensors in real time. 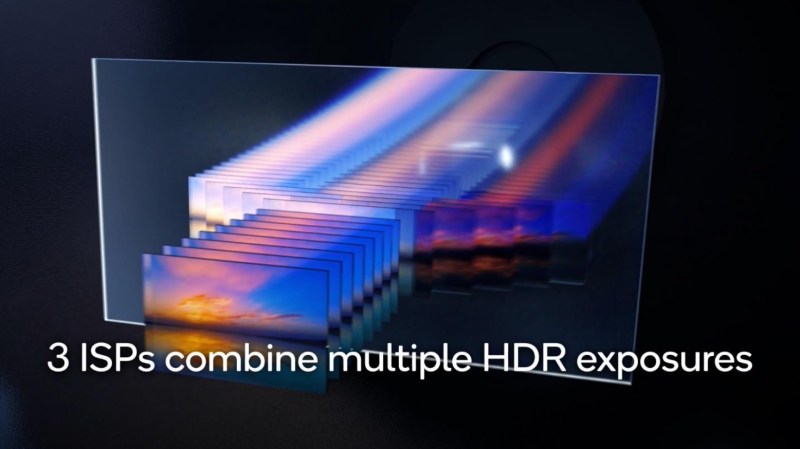 The latter technology, Qualcomm notes, is for the first time being brought over from the automotive and security camera markets to phones and tablets, enabling Computational HDR Video Capture: using staggered HDR sensors to record videos with “extreme dynamic range” spanning simultaneous long, medium, and short exposures, yet with low ghosting. Photographs can be captured in extremely low light — 0.1 Lux — and with 10-bit HDR support for over one billion colors. Spectra 580 also benefits from a 35% speed increase, and 2.7 gigapixel per second processing, enough throughput to enable burst captures of 120 full-resolution photos per second for extreme sports and action photography.

Another sign of machine learning’s criticality to image processing is found in the new chip’s 10th-generation “3A” AI system, which handles autofocus, autoexposure, and auto white balance. To train the new 3A system, Qualcomm equipped photo analysts with eye-tracking VR headsets and recorded how their eyes perceived images with different lighting and focus conditions. Now the system uses human perception-based guidance to focus and expose images, rather than merely optimizing captures by what computers might consider ideal standards.

If all of those improvements weren’t significant enough, the Snapdragon 888’s smaller AI core — the Sensing Hub — is also becoming significantly more capable in its second generation. While it runs TensorFlow Micro rather than TensorFlow Lite, the Hub’s performance has increased by a factor of five, and it can now offload 80% of the tasks that were previously handled by the Hexagon AI system. It will continue to enable always-on lift detection, screen waking, and ambient audio detection to fire up AI assistants, as well as supporting detection of car crashes, earthquakes, and specific activities, and performing low-power monitoring of 5G, Wi-Fi, Bluetooth, and location data streams. 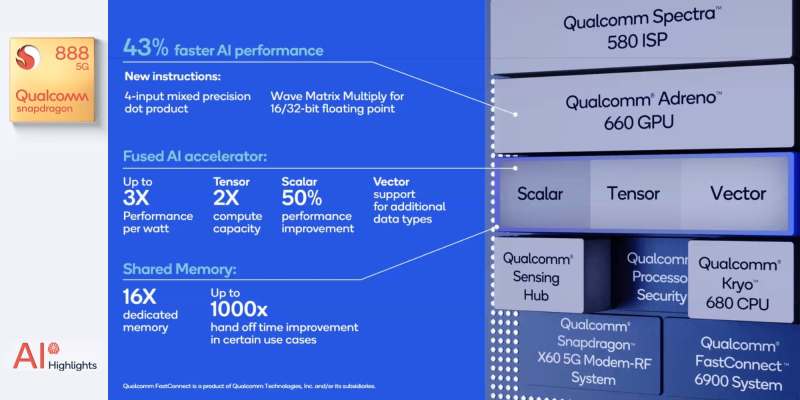 Snapdragon 888 is also the first chip to natively support both Truepic and the Content Authenticity Initiative, a cross-industry collaboration to ensure the veracity and authenticity of pictures. The chip is capable of placing cryptographic seals on pictures, enabling independent verifications that images weren’t modified after being snapped.

This year’s CPU and GPU improvements aren’t trivial, but compared to the AI and camera improvements, they’re more straightforward evolutions of what came before. Built with one ARM Cortex X-1 core at 2.84GHz, three Cortex-A78s with 2.4GHz speeds, and four Cortex-A55s at 1.8GHz, the 5-nanometer Kryo 680 CPU benefits from 25% more power and 25% better power efficiency.

On the GPU side, the Adreno 660 claims to have the Snapdragon’s biggest ever year-on-year increases, with 35% faster graphics rendering and 20% improved power efficiency, notably without the use of an ARM Mali core — the Adrenos are built with Qualcomm’s own internally developed graphics IP. Additionally, the 660 offers variable rate shading, up to 144fps frame rates, and touch responsive improvements in the 10% to 20% range.

The Snapdragon 888 is sampling to OEMs now and should begin appearing in smartphones starting in the first quarter of 2021.

Everything we recommend this holiday season