The Mandalorian season 2 episode 6 told us that things weren’t going to be fine, right off the bat. Any piece of fiction that begins with a happy protagonist never ends well. And so it was for our beskar-clad hero, whom most of us know simply as Mando (Pedro Pascal), who laughed — for possibly the first time in the history of the Star Wars series — when Grogu (forever Baby Yoda in our hearts) reacted and cooed to his name being called out, all while playing with his favourite toy: the spherical metal knob. And of course, there was the title of The Mandalorian season 2 episode 6 — Chapter 14: The Tragedy — as foreboding as they come. You knew that something was going to go wrong, and now it was just about finding out what that would be.

And it turned out to be Grogu himself, who was kidnapped by Moff Gideon and his Dark troopers that had been shown off a couple of episodes earlier. This might be the first time that The Mandalorian has picked up something from Star Wars video games, as Dark troopers were originally introduced in 1995’s Star Wars: Dark Forces (for MS-DOS and PlayStation). Dark troopers are said to be menacing in combat given their armour and the firepower they carry, but on The Mandalorian season 2 episode 6, they are merely used as jet-packing paratroopers. They swoop in, grab the tired Grogu, and lift off, giving Mando no time or chance to go after them.

The rest of The Mandalorian season 2 episode 6, or at least a majority of it, is like a video game level. As instructed by Ahsoka Tano last week, Mando takes Grogu to Tython, a planet at the core of the Star Wars galaxy. And after spotting the magic rock — it sits in the centre of a henge that feels inspired by England’s Stonehenge — Mando puts Grogu upon it, just as Ahsoka Tano had asked. Nothing really happens for a while, but just as Mando spots a new ship flying in (danger!), he turns around to find Grogu having created a force (Force?) shield that shoots out into the stratosphere. Mando tries to pick him up, but the shield is seemingly impenetrable and launches him back. 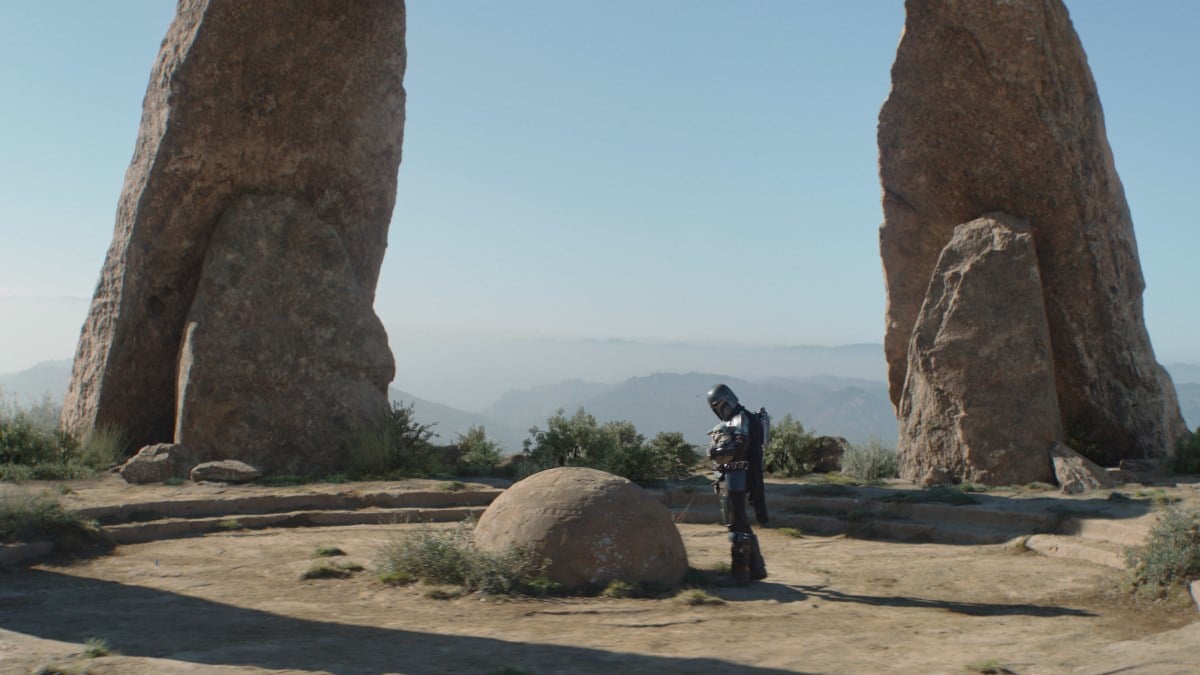 The seeing stone on Tython in The Mandalorian season 2 episode 6
Photo Credit: Disney/Lucasfilm

Mando leaves Grogu to confront the new arrivals. It turns out to be that bald man from the first episode, played by Temuera Morrison, who reveals himself to be Boba Fett. He was supposedly killed in Star Wars: Return of the Jedi. But he’s survived and he’s been tracking Mando ever since he visited Tatooine in The Mandalorian season 2 episode 1. He asks for his armour back, but Mando (naturally) doesn’t trust that he’s telling the truth. It doesn’t help that Boba Fett doesn’t follow the Mandalorian creed and plays by his own principles. Mando is further cornered when Boba Fett reveals he has an accomplice who has a gun pointed at Grogu’s head.

After the expert tactician negotiates a truce out of the situation, he learns that the accomplice is Fennec Shand (Ming-Na Wen) who was left for dead in The Mandalorian season 1 episode 5 on Tatooine. Boba Fett rescued her and gave her android internals. Fennec has been working for him ever since. Their conversation is interrupted by the arrival of an Imperial ship (remember the tracking beacon installed on the Razor Crest when he visited Nevarro?), and the two — Boba Fett and Fennec Shand — promise Mando that they will keep Grogu safe, as long as he agrees to return Fett’s armour in exchange. Mando needs the help, so naturally, he accepts.

The next 10 minutes or so make it clear why Chapter 14: The Tragedy has been directed by Robert Rodriguez, known for his action films-filled career spanning Sin City, El Mariachi, Alita: Battle Angel, and the Sky Kids franchise. Rodriguez gives every character enough time to shine on their own, and by downplaying Mando’s involvement, he shows that Fennec and Boba Fett are equally capable, if not more so. It’s the latter two who do most of the heavy-lifting against the incoming Stormtroopers, with Fennec taking them out as a sharpshooter while Boba Fett sneaks up on them and destroys them to pieces with his unique weapon. 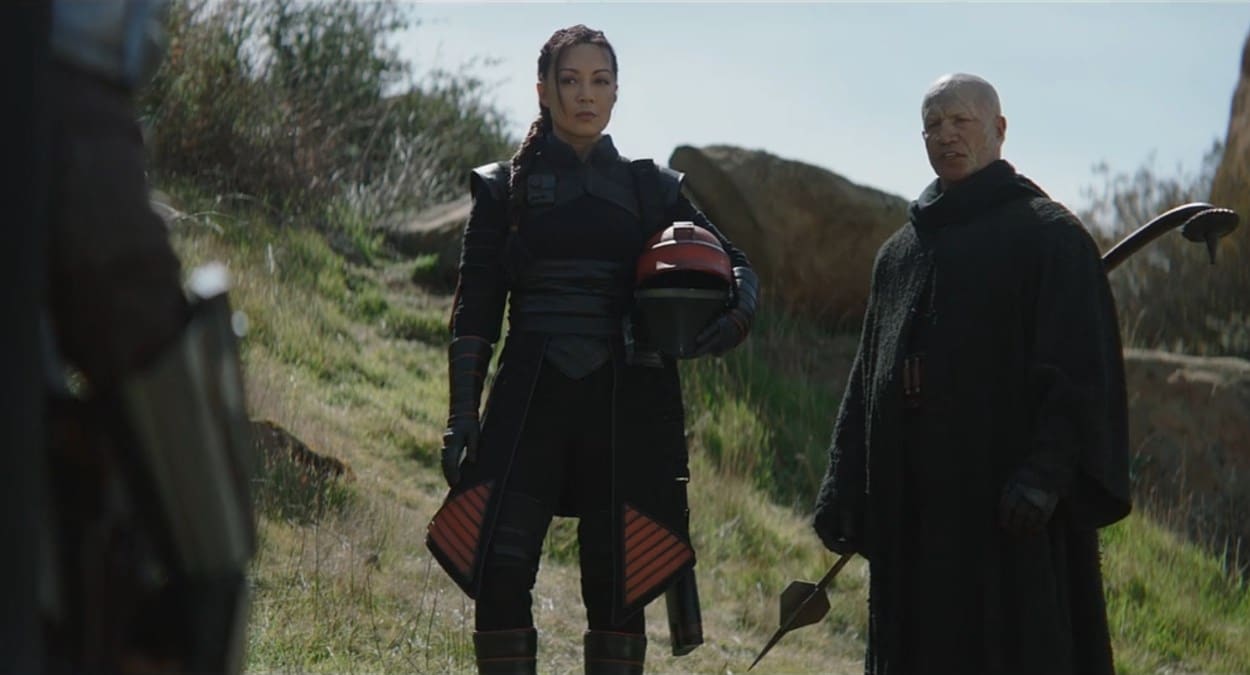 And just when Fennec thinks she has succeeded, she realises they’ve only survived the first wave. It’s textbook video game mission, with Grogu being the asset to protect as you stand your ground. Mando chimes in and uses his beskar as a defensive shield, but the numbers are threatening to overpower them. Boba Fett comes in for a heroic rescue, now suited up in the armour Star Wars fans have known and loved him in. Rodriguez gives him a worthy hero-entrance shot, and Boba Fett follows that up by showcasing his close combat abilities, making easy work of the second batch of Stormtroopers, who are scared enough to retreat to their ship and take off.

But he has an ace in the hole: the rocket on his back. As the two ships fly away to safety, Boba Fett delivers a parting shot in an attempt to take one of them down. It turns into a fluke double, as he accidentally hits the other ship which then crashes into the other. Mando is left impressed — and you know it takes a lot to impress him — but Boba Fett is quick to admit that he didn’t plan on it.

Any celebrations (including among the audience) are cut short, as a red beam crackles out of the sky like lightning. It hits the Razor Crest and blows it to smithereens, leaving Mando aghast. Poor Razor Crest, it’s suffered all season, only to get fully repaired, and now it’s gone forever. That’s not all. The attack came from an Imperial cruiser hanging over the planet, with a smiling Moff Gideon (Giancarlo Esposito) within. He immediately launches four Dark troopers, who converge on the magic rock where Grogu is now lying unprotected and half-asleep, tired of all the communicating he’s done. Boba Fett tries to stop them in his ship, but he’s unable to as they escape into the cruiser.

Back down on the surface of Tython, Mando sifts through the Razor Crest wreckage. All that’s left of it is the beskar staff he got in The Mandalorian season 2 episode 5, and — of course — Grogu’s favourite toy. Fennec and Boba Fett promise to stay with Mando until Grogu is back in his care, for they were unable to keep their end of the bargain. Mando has new allies, including Boba Fett. The new trio return to Nevarro, where Mando asks Cara Dune (Gina Carano) — now Marshal under the New Republic, she’s gone legit — to look up where a certain prisoner is being held. Mando wants to break him out so he can help locate Gideon’s Imperial light cruiser. Cara is initially hesitant to help because of New Republic rules, but when Mando mentions they’ve Grogu, she’s immediately on board.

The Mandalorian season 2 episode 6 ends on Gideon’s ship, where poor little Grogu has been doing his best to keep Stormtroopers at bay. It seems he’s gotten some of his training back thanks to the seeing stone. Gideon is quite impressed but he’s also aware of Grogu’s limitations: he feels very sleepy when he uses his powers too much. Predictably, Grogu becomes tired after taking out two Stormtroopers. Gideon then walks close and shows off his darksaber to tease his own powers (and possibly to remind audiences who he is, given he’s been away most of The Mandalorian season 2). Grogu is then stunned and chained, as Gideon asks his underlings to contact Dr. Pershing. They have their donor again, whose “high M-count” blood they need for the experiments they’ve been running.

It’s quite obvious what’s going to happen in the final two episodes of The Mandalorian season 2, as Mando launches a rescue operation with the help of his old and new friends. Mando, Cara, Boba Fett, Fennec, and Greef Karga together, I can’t wait to see this. And though we don’t know if any Jedi heard Grogu when he reached out from the seeing stone, I bet we will hear a reply in the remaining episodes.

The Mandalorian season 2 episode 6 “Chapter 14: The Tragedy” is now streaming on Disney+ and Disney+ Hotstar wherever available. New episodes release Fridays around 1:30pm IST / 12am PT.