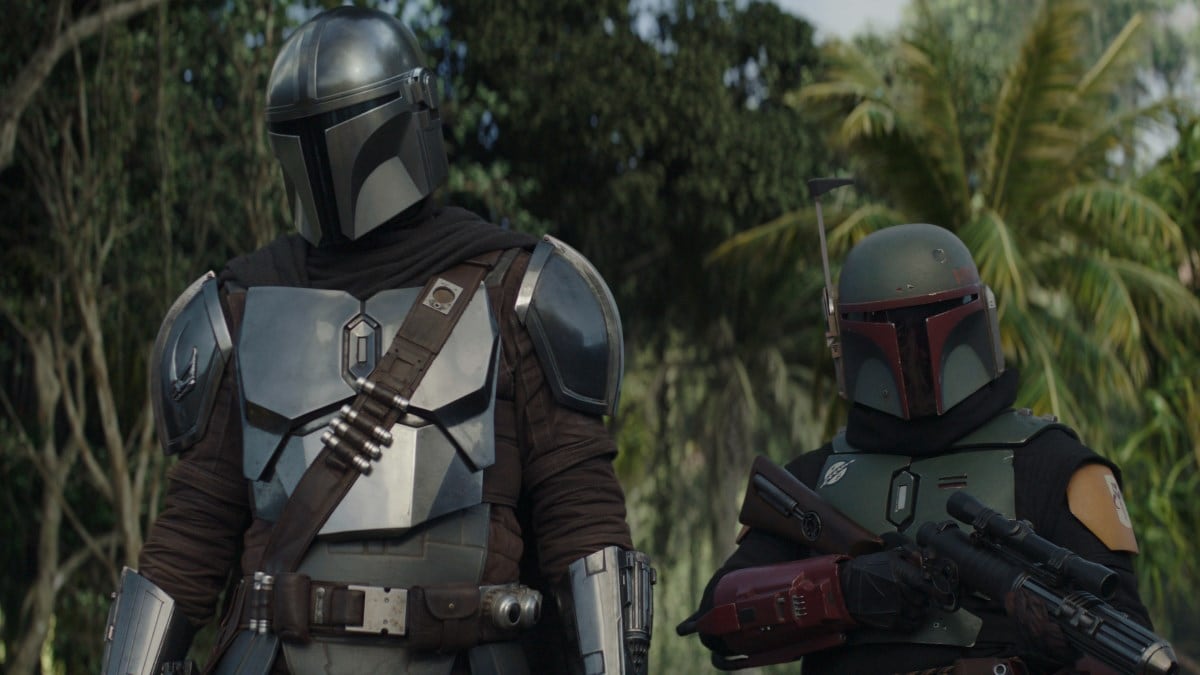 The Mandalorian season 2 episode 7 — Chapter 15: The Believer — was another action-packed outing on its surface, but it also gave us the most amount of screen time for Pedro Pascal’s face. And it built on the earth-shattering ideas first introduced in episode 3, when our titular protagonist Din Djarin (Pascal) met Bo-Katan Kryze (Katee Sackhoff). He’s been brought up to believe that all Mandalorians must not take off their helmets and keep their faces hidden at all times, but we learned then that’s only because his caregivers were part of an off-shoot cult called the Watch. It’s not standard Mandalorian culture, as Bo-Katan and the others tell him in The Mandalorian season 2 episode 3.

Those revelations have likely been swirling around in his head ever since, and Chapter 15: The Believer — written and directed by Rick Famuyiwa — brought them to the fore, thanks to the return of former Imperial sharpshooter and mercenary Migs Mayfeld (Bill Bur). Mayfeld originally appeared in The Mandalorian season 1 episode 6, where he betrayed Mando aboard a New Republic prison ship, only for the tables to be turned on him. Mando enlisted Cara Dune’s (Gina Carano) help towards the end of The Mandalorian season 2 episode 6 to help spring Mayfeld, because of his Imperial history, and that’s what The Mandalorian season 2 episode 7 begins with.

After Cara strolls into a New Republic scrapyard and walks out with Mayfeld — she’s a certified Marshal of the New Republic, if you will recall — they set off for Morak, a secret Imperial mining hub where Mayfeld believes he can access a terminal, which will help them locate Moff Gideon’s cruiser. Mando’s enlarged crew has grown to include Boba Fett (Temuera Morrison), Fennec Shand (Ming-Na Wen), Cara, and now Mayfeld. Landing on Morak, they formulate a plan to get inside the Imperial facility: hijack a transporter vehicle, disguise themselves as troopers, and waltz in. Except there’s a problem: they will be scanned, and no one except Mando has a clean record.

That means Mando must step out of his beskar armour, including that helmet he never takes off. And he does, signalling how important Grogu has become to him. It’s here that The Mandalorian season 2 episode 7’s all-important conversation comes up. Mayfeld notes that Mando’s “rules start to change when you get desperate.” Given he’s taken off his helmet, Mayfeld wonders what the rule is: “Is it that you can’t take off your Mando helmet, or you can’t show your face? ‘Cause there is a difference.” Mando doesn’t reply, because he’s likely wondering himself. Mayfeld then adds: “Everybody’s got their lines they don’t cross until things get messy.” And The Mandalorian season 2 has found Mando’s line: Grogu.

Soon though, matters are complicated. Two of their fellow transporter ships are blown up — they are carrying an extremely unstable substance called rhydonium — and soon the very pirates descend on Mando and Mayfeld, looking to do the same. Mando does his best to deal with them, but the fact that he doesn’t have his armour or any of his signature weapons slows him down. It doesn’t help that Mayfeld can’t go full speed, because the bumpy ride alone would set off the rhydonium. And just when things look very bleak, they are saved by TIE fighters and Stormtroopers. It’s a little funny, because it’s not every day that you cheer at the sight of Imperial forces, as Mayfeld notes.

It’s worth noting here that The Mandalorian composer Ludwig Göransson is pulling a lot of new material here. The score for The Mandalorian season 2 episode 7 is nothing like what we’ve heard before, and it seems to be reflecting the fact that Mando isn’t in his usual armour. He’s not only disguised, he’s also more vulnerable.

That vulnerability only goes up inside the Imperial facility after Mayfeld panics at the sight of Valin Hess (Richard Brake), an Imperial officer he served under, who is sitting in the very area where they need to access a terminal. Mando isn’t going back without a result though, and he volunteers to retrieve what they need from the terminal. Except there’s a caveat, Mayfeld says: the machine needs to scan your face to work. Mando steps up and tries to access the portal with his helmet on, but the machine screams error, which only further alerts the nearby Valin. Mando is forced to take off his helmet, just as Valin walks up to him and questions who he is.

Stormtroopers save the day in The Mandalorian season 2 episode 7
Photo Credit: Disney/Lucasfilm

Mando can’t really say anything because it would give him away, and thankfully, Mayfeld steps in just in time to save his skin. Mayfeld tells Valin that Mando’s hearing is terrible, which is why he wasn’t answering him. The two try to walk away but Valin’s interest is piqued, not least because Mando and Mayfeld were the only ones who made it safely with the transporter ship. Valin doesn’t recognise Mayfeld though, it seems, and it becomes clear why minutes later as they talk about a battle where the Imperial forces lost a lot of men. While Mayfeld’s anger is rising, Valin doesn’t seem to give two hoots about what happened, telling you how much he really cared for the men who served him.

And then, Mayfeld snaps as he shoots Valin point blank. After they take out the enemies in their vicinity, it’s interesting that the first thing Mayfeld does is offer Mando his trooper helmet back. The conversation with Valin is the most we have seen of Pascal’s face on The Mandalorian ever — and only the second time, the first being the season 1 finale — and it’s immediately clear that Mando feels naked without his helmet. The two then make their way out of the facility, with help from sharpshooters Fennec and Cara who had been standing by for aid. Fett then extracts them in his ship, just as Mayfeld blows up the entire facility with some extremely good shooting. Even Fennec and Cara are impressed.

As a result, they decide to let Mayfeld go, instead of taking him back to the scrapyard prison. Mayfeld may have done a lot of damage in his previous lives, but he’s clearly on the path to redemption now.

The penultimate episode of The Mandalorian season 2 ends on Gideon’s cruiser, as he gets an incoming message from Mando who spins his own words on him: “You have something I want. You may think you have some idea what you are in possession of, but you do not. Soon, he will be back with me. He means more to me than you will ever know.” Boom, mic drop, and cut to black! It’s time to rescue Grogu, boys. But what twists will The Mandalorian season 2 episode 8 have in store for us?

The Mandalorian season 2 episode 7 “Chapter 15: The Believer” is now streaming on Disney+ and Disney+ Hotstar wherever available. New episodes release Fridays around 1:30pm IST / 12am PT.