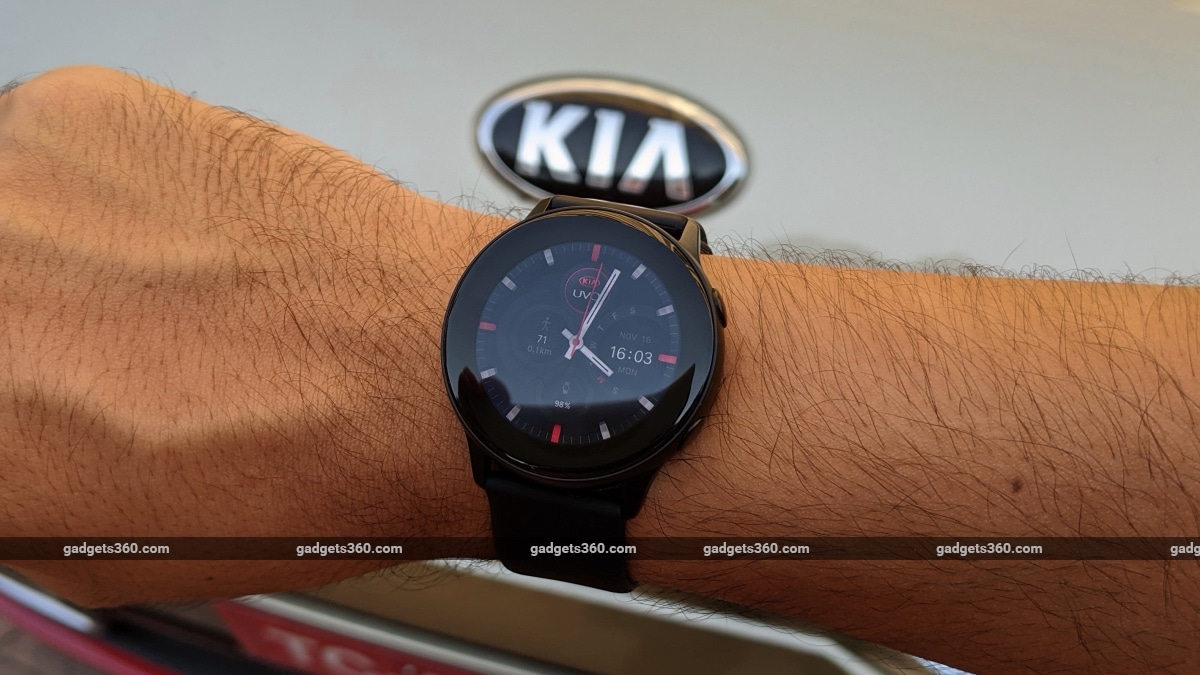 In-car connectivity comes in various forms, from basic entertainment systems that use your smartphone for connectivity, to full-fledged connected platforms that operate independently. While the former is usually a simpler and more affordable way to do it, the latter opens up many possibilities for things you can do with your car, whether you’re in it or away from it. Modern technology can turn your car into a completely independent computer on wheels. 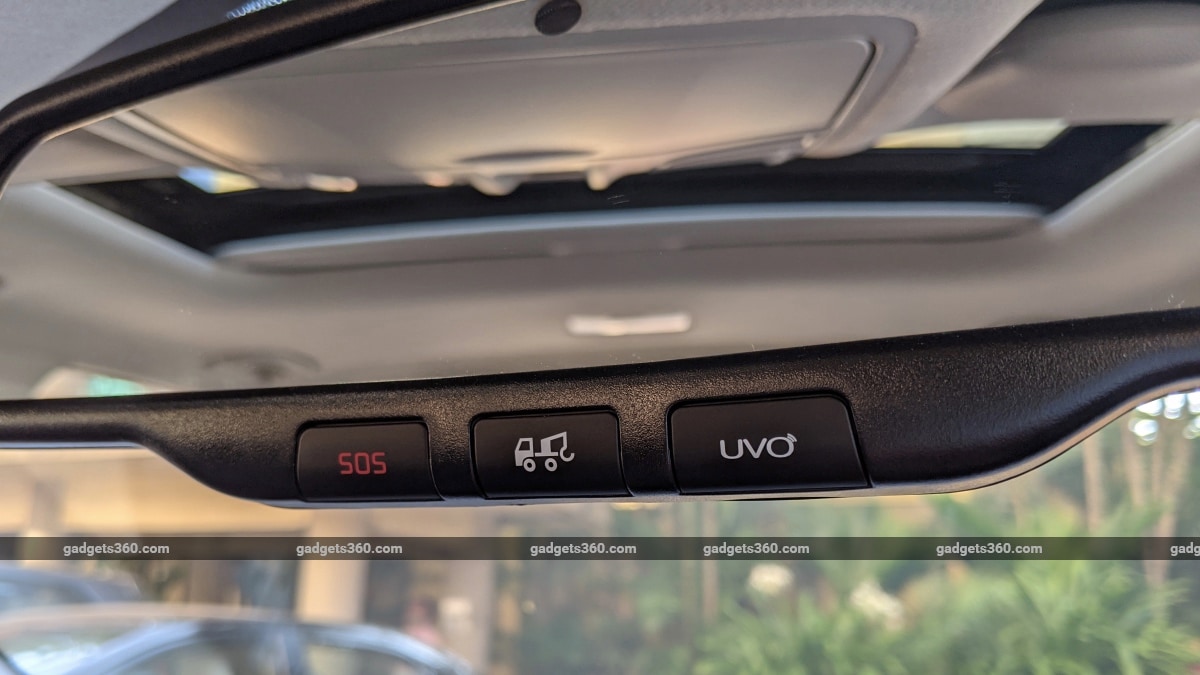 Quick-access buttons on the rear-view mirror let you call the concierge service for navigation assistance, or summon emergency or roadside services quickly

What is a connected car?

Before we go on, let’s first talk about what a connected car is. There are different ways to define this depending on how the car connects to Internet-based services. At its most basic level, a good in-car infotainment system could do this using either a connectivity app that links with your smartphone, or through popular protocols such as Android Auto or Apple CarPlay which mirror the smartphone’s interface and much of its functionality on the vehicle’s infotainment system.

If you’re on a budget, or if the car you like doesn’t have an option for a complete connected solution, this is the best way to get your vehicle online. This lets you see maps with traffic data, check your notifications, take calls using your car’s audio system, and even give voice commands through Google Assistant or Siri.

On the other hand, a full-fledged connected system is capable of much more, and doesn’t even need you to connect your smartphone. Instead, it will have its own SIM card and data connection for all its functions. This lets you communicate with the car even when you aren’t in it, and also lets you control hard-wired functions through the system. You could take advantage of mapping with dynamic data, in-car access to concierge and towing services, remote controls for car functions, and more.

UVO is a connected car software suite that is built into the in-car infotainment system, and is available as an option on all of Kia’s currently available models in India, including the newly launched Sonet. You will need to register and link your vehicle to the app, but Kia is offering three years of UVO services for free with the purchase of vehicles that are equipped with the hardware. There’s no word on how much it will cost post the free usage period, but the service is priced at $99 (approximately Rs. 7,300) per year in the US, for reference.

The in-car infotainment system has its own 4G data connection, which is embedded into the system directly and doesn’t need the user to insert a SIM card or set up a data plan. This is entirely transparent to the user, and data usage costs are covered by your subscription fee during the subscription period. This allows it to connect to the Internet as well as place calls to the UVO concierge, roadside services, or emergency services. In addition to the system’s own capabilities, it’s also compatible with Android Auto and Apple CarPlay, so you can switch to those protocols if you prefer. 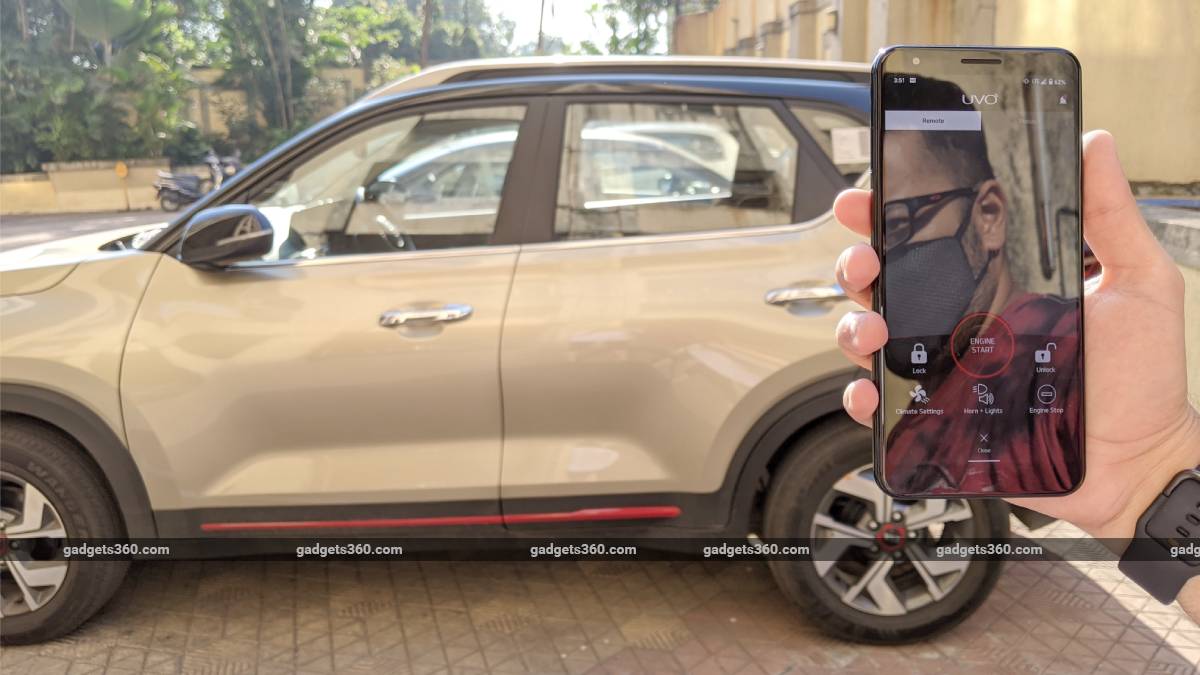 The UVO system is available on all of Kia’s cars in India, including the recently-launched Sonet

Thanks to the car’s independent connection, you can communicate with it even when it’s parked and you’re away from it, using Kia’s UVO smartphone app and companion smartwatch app. On the Kia Sonet that I had for this test (the GTX Plus 1.0L iMT variant), all of this was hooked up to a Bose seven-speaker audio system and a 10.25-inch HD-resolution touch screen.

Kia UVO: Inside the car

Just as your smartphone or tablet can use its an Internet connection to download and display fresh information all the time, Kia’s UVO system can power a number of key functions while you’re sitting in the car. The most important of these is navigation, with the in-car mapping system showing real-time traffic data, as well as the ability to search through a regularly updated list of points of interest.

Although I found the maps and traffic data to be a bit less accurate than Google Maps, it was certainly usable, especially with the added convenience of being easily and safely visible on the car’s console. Another useful feature of this car is a built-in air purifier, and the status of the air quality in the car can be seen on the screen. 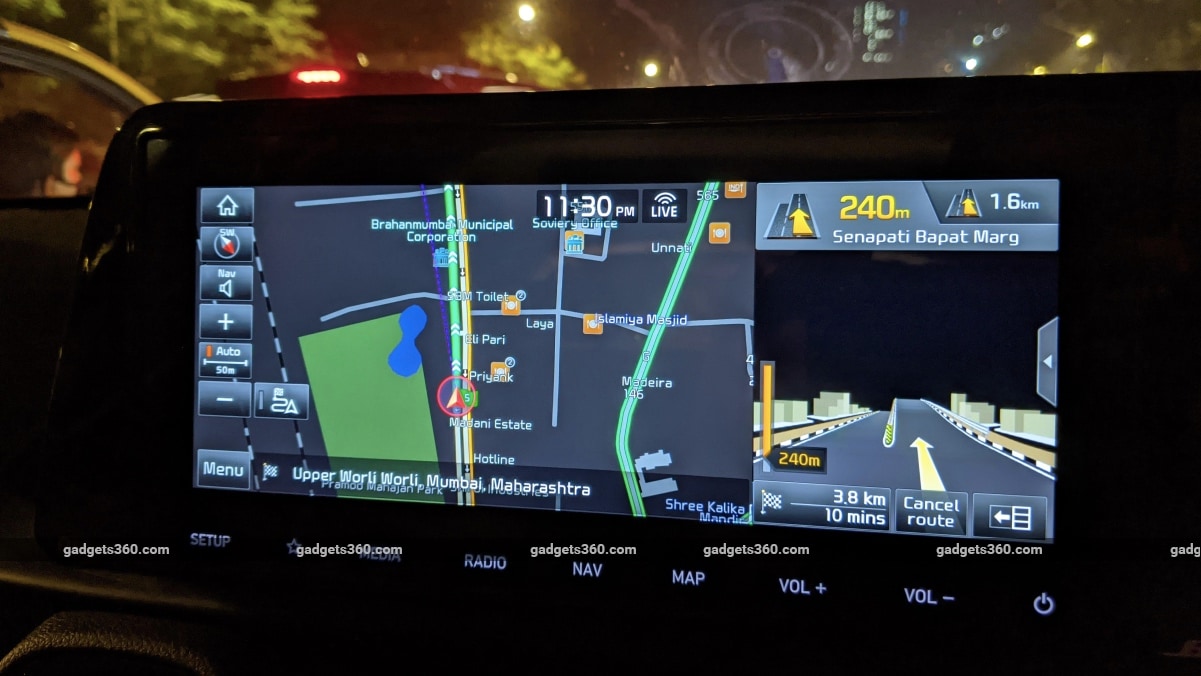 Kia’s UVO system also has some useful safety and communication features which can be used while driving. There are quick-access buttons on the rear-view mirror for emergency services, roadside assistance, and UVO’s concierge service for navigation help. The concierge service connected me to a real person within seconds of pressing the button, and I was able to get navigation instructions for a particular location sent to my vehicle quickly. I fortunately did not need to use the roadside assistance or emergency services buttons.

Just like smart speakers, the UVO system supports voice commands, with ‘Hello Kia’ used as a trigger word when sitting in the car. The vehicle’s voice assistant is powered by SoundHound’s Houndify technology, which isn’t as capable as Google Assistant, Alexa, or Siri, but does have some useful customisations.

These include the ability to set the car’s air conditioning temperature and blower direction, controlling music and calls through a paired device, lowering or raising the driver’s window, weather updates, and more. Voice recognition only worked properly with the windows raised while driving, and even then was only really accurate when giving the command from the driver’s seat. I also found its responses to be a bit slow, and didn’t find myself using it too often as a result.

Kia UVO: Outside the car

UVO’s truly noteworthy capabilities come into play when you’re away from the car, and this is where the concept of a connected car really makes a difference. Once set up and linked to the app on your smartphone or smartwatch, you can control or monitor some aspects of the car from wherever you are, as long you have Internet access and your car can connect to its data network. In Mumbai, I was able to connect to the Kia Sonet pretty much anywhere, except in a covered basement parking area where even my smartphone usually loses connectivity.

In outdoor parking spots, I was able to turn on the car, control the air conditioning temperature, monitor the air quality in the cabin, lock and unlock the doors, and geo-locate the car accurately at any time. You can even track the vehicle almost in real-time while it’s being driven; it takes only a few seconds to update the car’s location, so it was often a bit ahead of where I thought it was. A useful feature was being able to search for a point of interest on my smartphone and then send navigation instructions to the car. This was much easier than typing locations using the car’s display and keyboard. 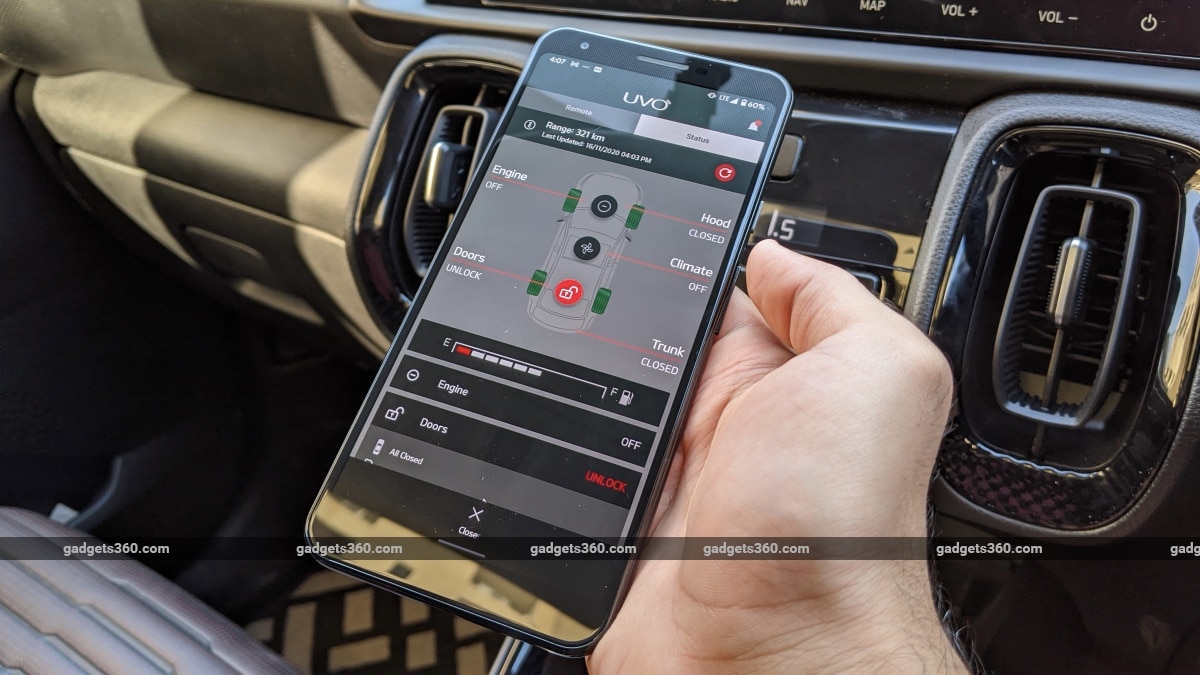 The UVO app lets you monitor the car’s diagnostics, as well as control certain things such as the doors, engine status, and air-conditioning

Other security features include valet alerts, geofence alerts, speed tracking, theft alerts, and notifications for basic things such as the door not being locked when the car is turned off. Trip records are also maintained, and you can monitor things like the fuel level, tyre pressure, and general diagnostics of the car using the app. All of this will come in particularly handy if you need to monitor how members of your family drive the car.

Usefully, these connectivity features also allow for some functions of the car to be controlled entirely remotely. This includes the ability to have your vehicle immobilised remotely in case of theft, although this can’t be done by you directly. Instead you’d need to contact Kia to get this done, and would involve some legal procedures prior to carrying out, but it’s the connectivity that enables this security feature.

Some of these functions can also be controlled from a smartwatch, if you have the app installed. I tried the diagnostics and remote controls using a Samsung Galaxy Watch Active, but it is also listed as compatible with Apple and Wear OS smartwatches. With Wear OS and Tizen, you also get special watch faces to quickly launch the UVO app from the home screen.

Is a connected car worth all the fuss?

According to research by analytics firm Counterpoint, three quarters of all new cars will be connected within the next five years. With IoT-enabled home appliances gaining momentum rapidly, it’s obvious that cars are the next big step for connectivity. Although priced at a premium right now, connected cars are a definite step towards the future of driving and mobility.

That said, many of the monitoring features available on the UVO platform make sense even today, especially when there are multiple people driving a vehicle, including young adults or chauffeurs. Even things like the ability to turn on the car and air conditioning remotely might be useful if you like to step into a cool car before driving off, and the safety and convenience features are welcome as well.

That said, connected cars are still a bit expensive; on the Sonet, the UVO system is only available on the higher trims which cost well over Rs. 13,00,000. Basic connectivity can be achieved using an Android Auto or Apple CarPlay compatible entertainment system, which uses your smartphone for some in-car functionality such as voice controls and mapping with traffic data. Connected cars are definitely the future, though, and have an undeniable cool factor today, particularly Kia’s well-equipped UVO system.